Developer Docs
/
Developers blog
/
What is new in 5.3 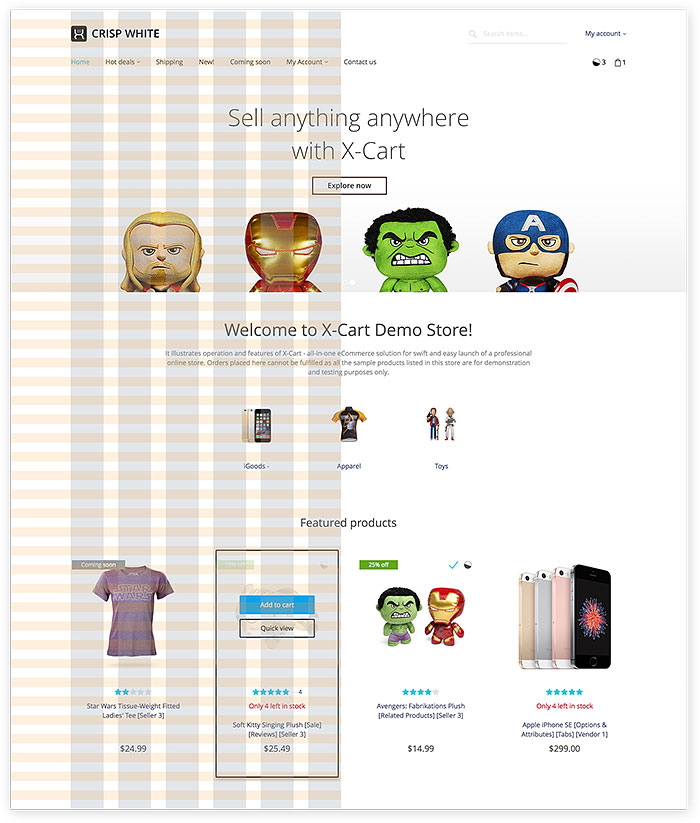 It has a 40px gutter (gap between column content) and a baseline grid with the line-height value of 20px. See the screenshot below. 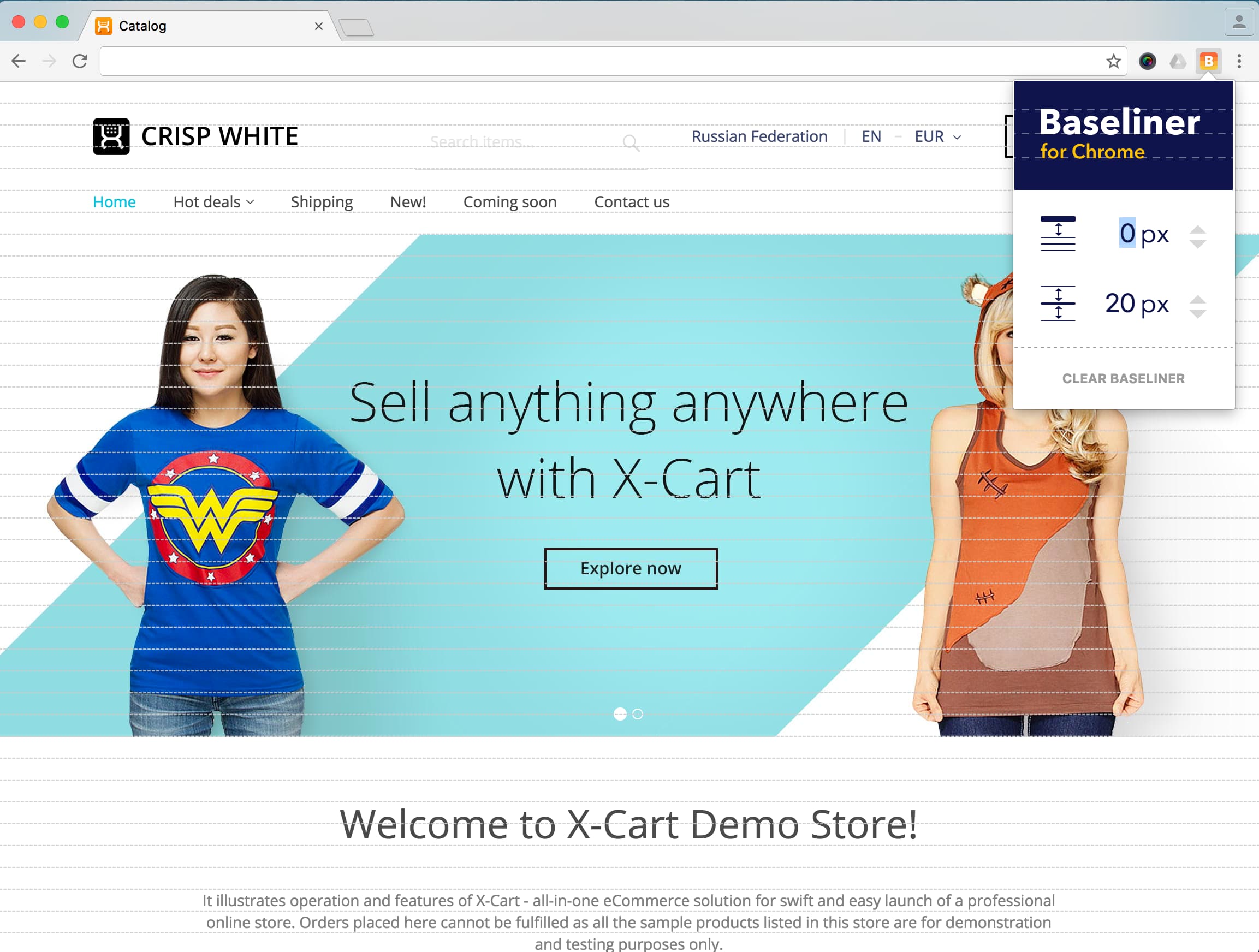 The grid makes pages easier to perceive, and here is when you want to use it:

Sure, it is up to you to decide, what size of margins to use; however, if you use a grid, your design will look more professional.

The minimal required PHP version is 5.4. An overview of the “new” features of this version can be found here: http://php.net/manual/en/migration54.new-features.php

However, we recommend to use PHP 5.6 or and especially PHP 7 for better performance.

Also, X-Cart supports MySQL 5.7.x by default. If you use an older version and want to run X-Cart on MySQL 5.7.x, you need to disable the option ONLY_FULL_GROUP_BY.

X-Cart 5.3 allows you to apply changes to PHP code in <X-Cart>/classes/ and see the changes immediately on next page load. Yes, you will not have to rebuild the cache of classes to see the change. You can add, remove or change decoration classes, @LC_dependencies annotations, etc. Moreover, if you add a breakpoint to a file in <X-Cart>/classes/, it will be triggered, too.

You will, however, have to rebuild the cache if you apply changes to the DB structure.

To enable such behavior, you will need to switch to developer mode by setting the variable developer_mode to On in etc/config.php:

Of course, your live store must not operate in developer mode, because this mode slows down the performance considerably.

In X-Cart 5.2, you did not have to worry about those issues, but you could come to a pitfall described in Doctrine documentation:

Instead of @LC_Dependencies, you should use the following annotations:

Finally, we upgraded our template engine to Twig. We thoroughly reviewed Smarty 3 and Twig and decided to use the latter, since it is more powerful and flexible. Although it already has a huge community, it continues growing very fast. Twig is very similar to Smarty in terms of syntax, and developers who are familiar with Smarty should be able to switch to Twig in a couple of hours. If you are a developer, you can see it for yourself in Twig’s documentation.

By using the following resources, you will find how to convert your custom Flexy code to Twig: http://xcart.github.io/flexy-to-twig/

If you just used ThemeTweaker or CustomSkin to modify the templates, you can convert Flexy modified templates to Twig by using the default convertor on the “Look & Feel” > “Webmaster mode” page after upgrading your store to 5.3.x.

A call with hash argument is used when the name of an argument is not alphanumeric; for example, contains a hyphen. Named arguments must be alphanumeric in Twig. {{ widget_list }} supports the same two ways of call.

Improved widget cache allowed a huge boost in load speed. The key changes which allowed that are as follows:

Here is the comparison table: 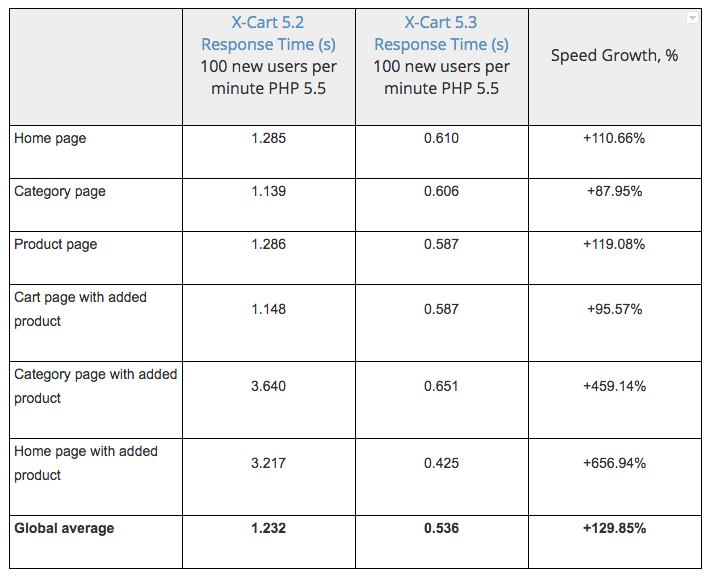 By using PHP Storm, you will get additional hint for Database::getRepo(‘…’) with more details by typing FQCN inside getRepo

You can use composer if you get X-Cart from github. Anyway, X-Cart 5 was added to github with the necessary components already pre-installed.

We recommend to use it for more transparent dependencies, clearer code and cheaper maintenance. Singleton pattern is deprecated in 53x.

X-Cart 5.3’s forms use DTO instead of Entity, and the system control data transferring from Entity to DTO and vice versa. Entity gets data only if it is validated by DTO. Form fields now are described and generated by SimfonyForm. Dependencies are defined by vueJS.

Each field is described in a separate class, which can be compound in various order. This way scenarios of their editing are just a list of fields. Bulk editing of other entities is easy, too: you need to describe fields (schemes of display and data handling) and then wrap them into scenarios.

In addition to that, the following minor changes were made in the skins/customer folder:

In X-Cart 5.0, you had to create around 20 files in order to properly create ItemsList. X-Cart 5.2 required you to have at least 5-6 files for that purpose. Now, X-Cart 5.3 can do with just 2 files. Also, you can disable form wrapping and easily connect to SearchPanel.

SearchPanels were also refactored and now can have different search case providers and switchable data storage. That means that you can build a search form much easier.

An article about these features will be out soon. Stay tuned!

This guide, as well as the rest of our docs, are open-source and available on GitHub.